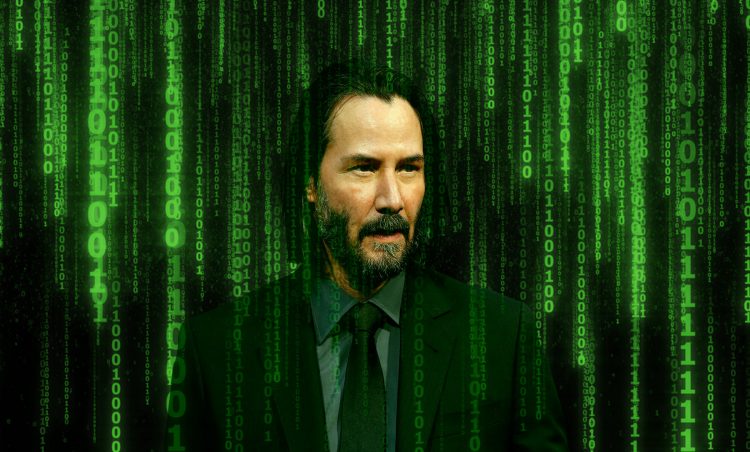 The star of the classic movie speaks! He says that humanity is about to break free from the Matrix. Are we to be concerned? Not unless you agree that a war will reshape human existence. However, Reeves is more optimistic. and perhaps we should all be.

The matrix is about to crack, and we are not referring to the film. This is big news for movie fans and adherents to simulation theory alike. We will all be free. “What a moment to be alive! We are living in exciting times.”

In the actor’s own words, “The human race has been enslaved for thousands of years.” He believes that mankind has been kept in a mental prison by dark elites and secret societies “who have done everything possible to repress us and avoid reaching our potential.“ Per Reeves, a war is now being fought between our supreme teachers and those who want to liberate us.

Keanu knows of what he speaks given his extensive studies of ancient texts like the Vedanta and Upanishads. It is all about defining reality. He accepts that some people are celebrity struck and just “keeping up with the Kardashians” as their mind food. However, most people have been “awakened”.

For those not in the know, the matrix is a holographic universe. It was fashioned by beings who want to control humans, and it has been going on for millennia, suppressing us in the process.

But is it real or only a movie in the collective consciousness, which seems like true reality, while it may not be. Reeves is not the only one with foresight on the subject of living in a “matrix”.

Pundits worldwide are also on board, with some of the most influential living in Silicon Valley in northern California, an area rich with billionaire geniuses. Several believe that we are living in a computer simulation right now and are fast investing funds to get us out.

Elon Musk is the most noted fan of the Simulation Hypothesis.  According to the business magnate, the chances of not living in a matrix-like computer simulation are “billions to one.” He has often been quoted by Simulation Theory proponents, of which he is the most well-known to the public.

Not only is he a proponent, but Musk seems obsessed with the concept, at least according to the writer, Tad Friend, in the New Yorker. He states that two billionaires of technology have gone so far as to secretly involve scientists to work on getting us out of the simulation.

The guys in Silicon Valley have “something wrong” with getting rid of the matrix according to Reeves, now becoming as vocal as Musk. He has a tip to offer. “Put your wallets back in your pockets. This has nothing to do with money or computers. It is a spiritual change that must take place, not a ‘hack’. “

Spiritual change is taking place that could affect the course of human life. Enough with the dark forces of wars, totalitarian leadership, and authoritarian control, Reeves asserts. People are awakening to the truth.

The world may end and it is already out of control. But we can save ourselves if we open our eyes to the obvious, like Trump’s manipulation, allowing humanity to get rid from the lethargy that blocks us from seeing that “the same few people, the same secret societies, the New World Order, are actively controlling our lives and repressing our true ability.”

Reeves becomes eloquent as he warns that it is time to recover our infinite power. We should open the doors of the “mental prison”. We might agree that it is not easy to do, but “it’s time to walk into the light of freedom.

By contrast, we can turn to Simulation Creationism, a model devised by Nir Ziso of The Global Architect Institute. It helps explain human existence and how and why it is controlled. Something out there wants to monitor us and understand life. The processes involved, including human action and thought, are being studied by an observer and stored in its consciousness with particular emotional responses noted.