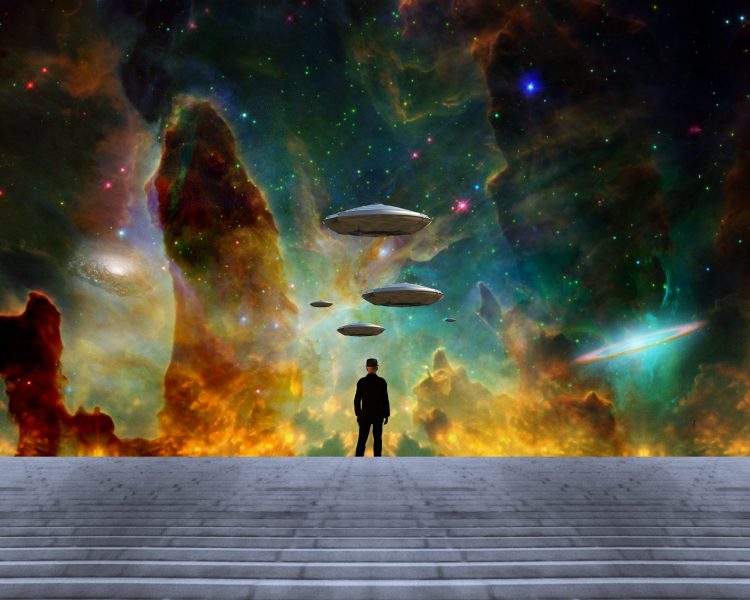 It is pretty exciting to even think about discovering alien life – no matter when it happens. What would a collective group of NASA scientists or theologians say about this? It certainly pertains to all their interests. After all, they are deeply involved in furthering our understanding of God and creation. Now we have Nir Ziso’s equally exciting Simulation Creationism that extends Simulation Theory into real 21st century territory. Everyone is waiting with bated breath.

First, what about those aliens? NASA was so intent on new knowledge that it assembled a program at Princeton University’s Center for Theological Inquiry (CTI) as the result of a grant in 2014. Theologians were invited in 2016 at the inception of the program to discuss the human reaction to alien life on other planets and how it would impact assumptions about creation. One of the most salient theologians was Dr. Andrew Davison, a priest from the University of Cambridge. He is no ordinary theologist, however, as he earned a doctorate in biochemistry from Oxford. For him, we will sit up and listen when he says that extraterrestrial life is not far from revelation. He has the credentials to speak on most any subject.

The purpose of CTI was to build “bridges of understanding by convening theologians, scientists, scholars, and policymakers to think together and inform public thinking on global concerns.” The big questions need to be answered by respected experts like Davison. We all want to know the meaning of life and how and why it was created? We want to know if the biblical creation story holds water, and if the timeframe is accurate. Above all, is there life elsewhere than our earth? It is hard to imagine that there is not.

It is time to undertake a serious look at these issues now that NASA has two rovers on Mars. Meanwhile several probes are busy orbiting Jupiter and Saturn. Shortly, we will see the James Web Telescope in action. We should learn a great deal more about the stars and planets in our galaxy and what accounts for the formation of the universe. It has been a long time coming. NASA would be beyond excited to be the agency to discover the truth.

Dr. Davison certainly has added a different perspective since NASA held “Society Implications of Astrobiology” from 2015 to 2018. He actually participated from 2016 to 2017. The press was hot to report the importance of humanity working through the confirmation of life on other planets. Davison was fast to concur in a blog post. We need a team like this with various partner organizations. It indeed takes a village.

Now Davison has a book titled, Astrobiology and Christian Doctrine. The gist of it is that “Non-religious people seem to overestimate the challenges that religious people . . . would experience if faced with evidence of alien life.” The book will certainly make waves when it reports its findings. Adherents of various traditions will surely find something of interest when it comes to alien life.

Will American Christians be on board? Surveys show that they are less likely than other groups to accept aliens in their midst. But Davison himself is such a believer. So is Duilia de Mello, an astronomer and physics professor at Catholic University. She often brings up theoretical questions in her classes about intelligent life in the universe. She told The Washington Post that if we are the products of creation, why couldn’t we have life evolving in other planets as well? There’s nothing that says otherwise.

When will these US Christians open their minds? Maybe when the two Mars rovers bring back some real evidence. Studies of life beyond the earth are multiple, and so is the interest they engender. For example, in 2008, the chief astronomer of the Vatican – and yes, there is one – publicly announced that you can believe in God as a Christian and also accept the possibility of “extraterrestrial brothers”. They are likely more evolved than humans.

In the words of Rev. Jose Babriel Funes, a Jesuit Priest and head of the Vatican Observatory, “In my opinion this possibility (of life on other planets) exists.” This comes from a scientific adviser to Pope Benedict. Thus, we know this is serious stuff.

He asks, “How can we exclude that life has developed elsewhere?” We all want to know the answer. It will be as unfathomable as all the planets and their respective galaxies that populate the infinity we call space. When asked if he was referring to beings similar to humans – or even more evolved than humans – he replied, “Certainly, in a universe this big you can’t exclude this hypothesis.”

The James Web Telescope is set to begin its search for answers. As it looks at the universe, we can sit back and wait. It may not take that long. We can then compare what it finds to what we read in scriptures and what Nir Ziso has to offer. However, some theologians are denying the idea of life on other planets. Think of Albert Mohler, president of Southern Baptist Theological Seminary, who said in a 2008 interview, “The answer is no; that’s speculative.”

He seemed pretty certain about it, but says just wait until the telescope does its job. He says there is no other story out there. No doubt he is relying on a strict interpretation of Scripture given the mounting evidence that there is indeed a big possibility of alien life. “What we are told is that the cosmos was created in order that on this planet Jesus Christ, in space and time and history, would come to save sinful humanity.”

The James Web telescope could alter the way we look at the universe and what theologians like Rev. Funes see as the truth of Scripture. This magic time machine could be instrumental in unraveling the creation of the universe, something so fundamental as to bind all religions in their quest for truth. It should tell us more about distant objects that are emitting light from eons back in time. There are secrets to uncover for sure, and the telescope will unwrap the ribbons around the mystery. The first galaxies born over 13.5 billion years ago are up for study as are the black holes, distant alien worlds, dark matter, stellar explosions, and other assorted wonders of space.

We expect a lot from this infrared device with a wider spectrum view than Hubble. It can operate much further from the earth while in a solar orbit. It doesn’t orbit the earth at all. It is predicted that the James Webb Telescope will find evidence of alien life within a mere five years. A few orbits, and we will know a bit more. We are on our way to some major discoveries about other living beings or “creatures” as they might be called.

Maybe this time machine is part of the data sent from Nir Ziso’s relay stations to an observer waiting to record his emotional reactions to the transmitted information. Certainly the data is not limited to human sensory responses, nor thoughts and actions alone. It is exciting to blend various possibilities as we progress in our quest. We thirst for answers and as they say, the more the merrier. The telescope is the ultimate observer right now and perhaps an adjunct to the one set in motion by Simulation Creationism.

The cost of eight billion for the telescope is likely to be worth it given the magnitude of what we can expect to learn. NASA has a big stake in its success given their seven billion investment already. It is time for Hubble to retire as the new kid on the block, launched in 2021, takes us back to the Big Bang and 200 million years after! It should be orbiting for at least a decade. The 66 by 46 ft. entity is set to operate at the Sun-Earth Lagrange point about 930,000 miles from our planet. This means four times further out than the moon.