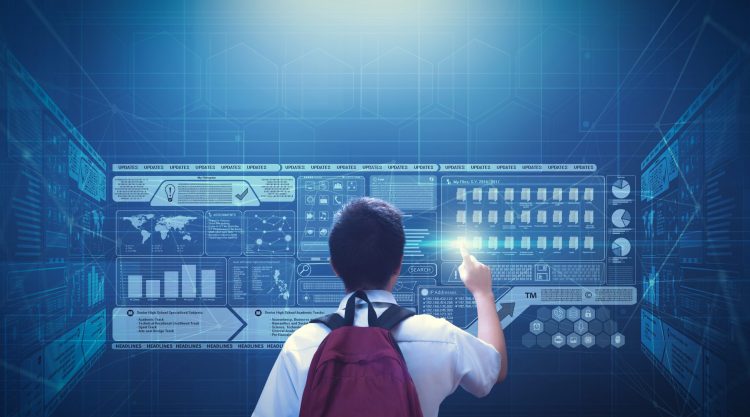 Star Trek: The Next Generation has had an impact for many reasons. Apart from the exciting visuals, it introduced humanity to a holodeck. In short, it is an immersive, realistic 3D holographic projection of an environment a person could interact with – perhaps even touch.

We use holograms in this century for many purposes other than titillation and entertainment. They have found a mole in medicine, art, security and defense, and education. Lasers are being explored along with digital processors and motion-sensing devices to fashion better and more realistic holograms. The goal is to expand the possibilities of interaction.

So what happens when “two virtual people touch?” How real is it and does it matter in the greater scheme of things? No doubt it is interesting to imagine a new dimension beyond wearing gloves and pushing a button. It would certainly feel more natural like the real pressure experienced.

Graphics are key in providing the illusion of a 3D virtual image. You may think of it as a modern variation of Pepper’s Ghost, a 19th century technique that thrilled Victorian Era theatergoers. It was about creating realistic supernatural visions on stage. Glass and mirrors can make a two-dimensional image appear to hover in space. Now haptic feedback results from nothing but air. It is a world of difference with intriguing prospects, and not just for magicians.

Let’s take a closer look. Mirrors are arranged in a pyramid shape with one open side within a larger system. When a hand reaches through this open side, it interacts with computer-generated objects that seem to free float inside the pyramid. The graphic-created objects are controlled by Unity Game Engine, a known software program used to create worlds and their 3D objects in video games.

Moving on, a sensor tracks the movements of any hands and fingers inserting a single air nozzle direct jet of air, resulting in sensations of actual touch. Electronic hardware is the secret sauce. It controls the nozzle’s movements with an algorithm. The nozzle responds to the user’s movements accordingly with a combination of direction and force. It sounds simple and plausible.

Going back to the basketball example, the “aerohaptic” system has been demonstrated with an interactive projection of a basketball; amazingly, the ball can be touched, rolled, and even bounced through feedback from air jets. The virtual surface of the basketball dictates the functioning of the system. The rounded shape of the ball rolls from the user’s fingertips. They can choose to slap it with the palm of their hand like a pro.

Yes, it is still a virtual ball that can be manipulated with more or less force. The user responds with either a hard or soft bounce. Just like moving a real basketball, it takes effort just to model real actions. Replication happens with a few jets of air.

Smells can be Generated

Now that touch has been taken care of, what of the sense of smell? Surely such a concept is yet to come as it already has in some avant-garde movie experiences where it is piped in. New functions will enhance current systems. It may not be like a Star Trek holodeck experience, but close enough. It is a futuristic idea but the time has come.

It is also time to add the dimension of temperature to the equation: both the sensation of hot and cold. The uses of all these virtual sensations would be promising and not only in  advanced video game equipment. The technology would have to be subtle for use in therapy or other sectors. It would be like adding new components to a circuit board. It could change the face of the field of psychology and psychiatry, not to mention physiology. Doctors could view, feel, and then discuss tumor cells, while showing their patients the feel of the proposed medical procedure.

How does this information affect Simulation Theory and Simulation Creationism? The first hypothesis posits a virtual reality created by a future generation of geniuses or aliens, running it with a supercomputer. By contrast, Nir Ziso, creator of The Global Architect Institute offers a similar digital realm but one with a mindful observer and basic purpose of understanding human actions and the workings of the universe. We might expect to see jets of air also working in both contexts to make the simulations ever more realistic.

A Game-world or a Brane-world? Not an Easy Choice!

Does Math Make up the Universe?

Does Math Make up the Universe?