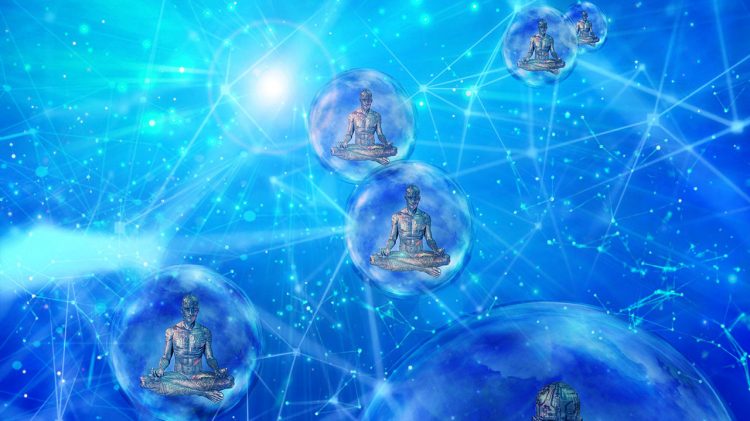 God and visible creation in the universe are intimately connected. Believers look at the universe and warn how finely tuned it is because everything should be perfect to enable life to exist. Atheists instead confirm a vast number of worlds in which anything can happen by accident, including us. Atheists also think that multiple worlds undermine God, as they eliminate the need for intelligent design. Multiple universes are now mainstream science, incorporated into numerous theories devised by astrophysics. There could be an infinite number of worlds, and theologians are trying to find consistency with the leading atheist ideas about them. The argument is that multiple worlds are consistent with modern cosmology, although it is merely a speculation. The vast expanses of our universe and the possibility of others leave the traditional idea of God suspicious and irrelevant. This vastness implies an extremely large number of possibilities and we just happen to be in a world that is fine-tuned perfectly for us. Thus, the atheistic argument is that there could not be a God even for our universe and much less for the multiverse.

In Simulation Creationism, a theory proposed by Nir Ziso from The Global Architect Institute, humanity and the earth have but one reality and one world. It is the very place we inhabit and outside of which we cannot really survive – not with substantial technological efforts and this is under a question mark too. Others are “demon worlds” inhabited by different lifeforms and realities. Hell, for example, is a different world where sinners end up in terrible conditions: “And the devil who had deceived them was thrown into the lake of fire and sulfur where the beast and the false prophet were, and they will be tormented day and night forever and ever” (Revelation 20:10). Some might not even have same physical realities as we experience. They might be just spiritual realms, propose completely incomprehensive realities, and they can be leveled. The Bible confirms many worlds in Christ’s words: “In my Father’s house are many rooms” (John 14:2).

The atheistic argument is clear. An infinite number of chances means that one can achieve what one is looking for at least one chance. But why should we think there is more than one world? Maybe some scientists simply do not want to admit there is just one universe, which provides a rather good argument for God and creation. Any other arguments for multiverses would be based on the structures we observe, like the laws that make another world possible. This also means that certain general laws govern one or all worlds – all fine-tuned for life. Without such laws, we would not have grounds for postulating other worlds; scientific reasoning gives such presupposition or belief. The question of fine-tuning in one or all worlds, however, does not change. Any of these solutions would need a Creator: “It is he who made the earth by his power, who established the world by his wisdom, and by his understanding stretched out the heavens” (Jeremiah 10:12).

In Simulation Creationism, Nir Ziso argues that God creates worlds in cycles. When one world comes to a natural or supernatural end, it ceases to exist in The Simulation and a new world is created, as seen in the Biblical testimonies: “For behold, I create new heavens and a new earth, and the former things shall not be remembered or come into mind” (Isaiah 65:17). We see such a theory in the pre-flood world in the Bible (Genesis 6) as well as in many other religious traditions worldwide. The theory, moreover, does not limit the idea of several worlds existing at the same time. Let us see how it may be encouraged in a many worlds theory.

When one dwells deeper into the many worlds theory, there is a clear need for a generator to be well designed to create even one life-sustaining world. It has to have just the right laws to create a bubble universe and to create constants from one world to the other. Of course, we can measure these constants only in our world. Invoking the multiverse does not solve the design problem that atheists set out to solve. In fact, it doubles the question of creationism which atheists seek to disprove. Some Christian philosophers think that a multiverse makes a lot of sense as God would create the world or the universe via a multiverse. There would be the infinite creativity of God, showing how enormous His creativity is. In fact, God might have simulated several worlds at once.

What if some worlds are lifeless and terrifying? For an infinitely creative God with unlimited resources, He does not have to be efficient. Efficiency is relevant only for a creator or an engineer with limited resources. It is a suggestion how we should keep things going: “Better is the end of a thing than its beginning, and the patient in spirit is better than the proud in spirit” (Ecclesiastes 7:8). While it may seem lunatic to spend unlimited resources, in Simulation Creationism, these worlds may just be preparations for life-to-be or as possible worlds that only need to actualize. On the other hand, we might not know if human existence is the only purpose of creating the world. It is certainly one of the reasons but may not be the only one. These other worlds may fit God’s purpose.

After all, while we have learned about the angels and demons who appear and disappear in our world, we do not know where they actually reside in material or spiritual form. The Bible tells us they are persons (we even know their names, at least the eight archangels), they have their lives, they are involved in this world, there is a finite number of them, and they interact with God. Where do they live? How do they exist? There should be a body of laws that govern these finite non-physical persons.

One has to stop putting human limitations on God and understand God from the human perspective. We can only argue for the apophatic viewpoint. The fact that God does things differently from the way we would do is a measure of God’s independence. It undermines the traditional ways of thinking about God’s existence but it also enhances traditional thinking about God’s essence and how He simulates the world in which we reside.