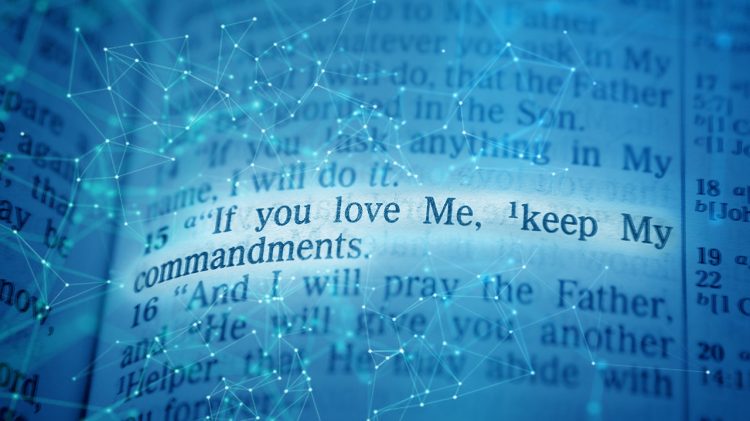 In the beginning, God created the heavens, the earth and all things: a vibrant new world was born. Genesis does not tell us much about how this was done. Granted, it is not overly important. What is important is that God created everything we see. But human curiosity is huge and we want to know and understand. John tells us in his Gospel a revealing truth: “In the beginning was the Word, and the Word was with God, and the Word was God. He was with God in the beginning. Through him all things were made; without him, nothing was made that has been made. In him was life, and that life was the light of all mankind. The light shines in the darkness, and the darkness has not overcome it” (John 1: 1-5). Finally, we get a clear message that the Word is responsible for Creation: “By faith, we understand that the universe was created by the word of God so that what is seen was not made out of things that are visible” (Hebrews 11:3).

So now we are clear: God created everything through his Word. It did not come out of anything as modern cosmologists argue, but it came from invisible things. The universe had a beginning, as Genesis tells us (Genesis 1:1), but it may be wrong to use this word when the beginning of the universe is something most cosmologists think of in a purely physical sense. The Simulation might be infinite, but it also has existence, meaning it was created. A picture may have a beginning, but its true essence is the painter. It would be silly to point to the first sketches of an artistic masterpiece and try to explain the reasons and ways of creation of the picture only by looking at these few dots.

The same goes with the multiple theories about the Big Bang, inflation, and all other “symptoms” we may detect that answer the physical question of beginning. It is not very relevant: significantly more relevant is that the universe exists as a static universe and points to the fact there must be a source of reality. We do not live in a hypothetical world, but a real-world, where reality is understood according to Nir Ziso’s theory of Simulation Creationism. Creation consists of God, His Simulation, and all things inside this Simulation. God is the source of reality and decided to make two other things in this triad real.

The ultimate reality is God, “For the word of God is living and active, sharper than any two-edged sword, piercing to the division of soul and of spirit, of joints and of marrow, and discerning the thoughts and intentions of the heart” (Hebrews 4:12). He is not contingent, He is the most real fundamental being. He frames the particular laws that govern our tangible reality. These laws are approachable, and we may be able to explain the entirety of The Simulation in terms of a succession and articulation of physical states that compose it. We cannot influence our inability to escape these laws: “So the law is holy, and the commandment is holy and righteous and good” (Hebrews 7:12).

If we dwell only on this, however, we can’t explain the existence of the universe. These two approaches are important to understand that cosmologists and theologians do not ask the same question, and the ridiculous idea of a struggle between science and religion is completely cast aside by realizing there is this fundamental difference. It is not at all a modern retreat from older theories: the Cappadocian Fathers (like St. Basil the Great, St. Gregory of Nissa, etc) said a lot about it, while St. Thomas Aquinas specifically sees the issue of creation as unrelated to whether the universe is an eternal succession of physical states or not.

Roger Penrose proposed that we are bouncing through one universe after another as each one exhausts its energetic potential and becomes a liminal state in which a new universe arises. It is similar to the cycles of simulated worlds in Simulation Creationism theory, and to the words of Jesus who clearly says what passes and what stays forever: “Heaven and earth will pass away, but my words will not pass away” (Matthew 24:35). This happens to be a common view of many Indian forms of theism, and it may even be accepted in Christianity, as it does not touch upon the basic question of divine origin. We have seen so far that the Word of God, through which creation happened, is not looked at from the perception of Big Bang cosmology. If it were, it would be necessary to prove there were no physical states or laws at all before the allegedly “Big Bang”. It is not the mechanism of creation that is relevant here but a manifestation of existence. God is certainly the ultimate ground of all being, but not necessarily the direct designer of every single mode of creation, poetically explained as “The grass withers, the flower fades, but the word of our God will stand forever” (Isaiah 40:8). It is a mechanical thing that stems not from God as reality (or not directly) but from the second-level reality – that of The Simulation’s “Supercomputer”.