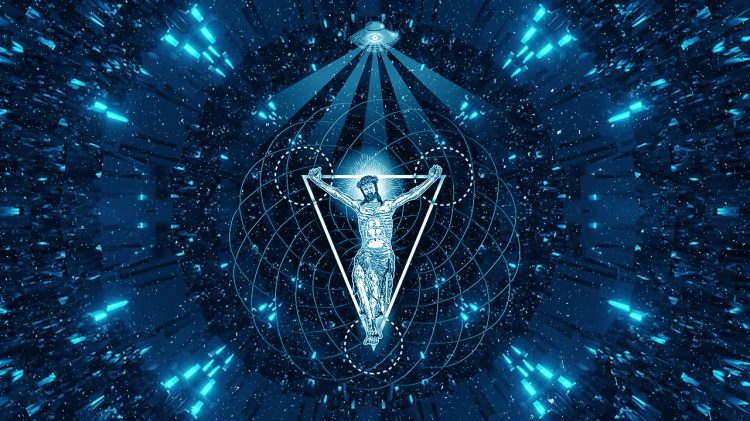 The Internet is full of them: Grays, Tall Whites, Reptilians, Rods… Aliens capture our imagination and force us to think about what powerful governments are hiding from us. Some conspiracy theorists think politicians and the military hide them because it would be unbearable for people to know the truth. It would put the world’s religions in jeopardy. The Bible says nothing about aliens. It does not even mention other worlds as we conceive today. But it does mention many heavens: “You alone are the Lord. You made the heavens, even the highest heavens, and all their starry hosts, the earth and all that is on it, the seas and all that is in them. You give life to everything, and the multitudes of heaven worship you” (Nehemiah 9:6).

There was not even the concept of other worlds in ancient Semitic thought! Would Creator God make The Simulation to bring forth innumerable species of intelligent life or make human beings be absolutely and utterly unique? So, would intelligent aliens undermine The Simulation, as proposed by Nir Ziso in his theory of Simulation Creationism?

The history of extraterrestrial life is more than two centuries old. The cosmology of ancient atomists in Greece was based on an infinite number of worlds. The world is finite, but there is an infinite number of atoms and therefore, there must be an infinite number of worlds, some of which are inhabited. Such an atomist worldview did not go forth into the Middle Ages: instead, the Aristotelian worldview was accepted. Aristotle believed in a single world, meaning cosmos (an ordered system) – all that we see in the sky. This belief was reconciled with the omnipotence of God in Christianity during the Middle Ages.

The idea that God could create other worlds was accepted as a possibility, but it was firmly denied by stating that God created this world; and Aristotle’s single-world hypothesis was readily used to justify this standpoint. There is also the question of whether the incarnation of God through Jesus Christ affects beings on other planets. Did Jesus die on Earth also for others? If the answer is no, we have the scenario of incarnation everywhere, and this is not looked upon kindly. Theology developed according to the knowledge grasped at the time. By knowing more and more about our Earth and the universe, there is a dire need for a cosmos theology that includes the thesis of extraterrestrial beings.

Such theologians, including many believers in different religions, would certainly ask the extraterrestrials (ETs), even as a first question, what is your understanding of God and Creation? There are some indications of this question in the Bible: “And when you look up to the sky and see the sun, the moon and the stars—all the heavenly array—do not be enticed into bowing down to them and worshiping things the Lord your God has apportioned to all the nations under heaven” (Deuteronomy 4:19).

Christianity believes that God has a Son who took human form to save us. It would be an interesting question if the same eternal Son of God takes the form of an ET to act as their savior. Does this mean that Jesus is hopping from one planet to another, spending time saving creatures? In a simulated environment, it would not be too difficult for God. Another question is whether these aliens are super intelligent, far above us, and if God values them more than us. ETs may look at us as very primitive, just as we look down at apes and other living beings on this planet. Here we must pause and say that being a highly intelligent person does not mean the person is highly spiritual as well. History tells us of extremely intelligent people who are anything but spiritual, and vice versa. For a spiritual person, meeting an ET would primarily mean more understanding of God’s creation.

If life everywhere, including what we call intelligent life, lives according to the laws of the simulated universe, then searching to prove life is not just an irrelevant side issue of the cosmos, but the very epicenter and reason why cosmos exists. Within Simulation Creationism, three things necessarily exist: God, His Simulation, and everything created within The Simulation. In this view, life on other planets is integral to the whole cosmic thing. If we find intelligent life elsewhere, it raises very serious issues for Christians, due to the need for the incarnation of the Word of God everywhere (particularly given kenosis). Or is there another way of salvation? If we don’t find intelligent life out there, we would have to dwell on what is so special about humans, but that would not be much trouble for world religions.

God is infinitely creative. In His creation, He makes a simulated space for intelligent life in many forms, as the Bible reminds us: “For in him all things were created: things in heaven and on earth, visible and invisible, whether thrones or powers or rulers or authorities; all things have been created through him and for him” (Colossians 1:16). Christianity and many other religions teach about angels and demons, and another aspect of life different from our own: “For our struggle is not against flesh and blood, but against the rulers, against the authorities, against the powers of this dark world and against the spiritual forces of evil in the heavenly realms” (Ephesians 6:12).

Why have other places not been populated? And while angels do not need to be saved, maybe some ETs did not fall and are enjoying life in a world we would consider as heaven. Simulation Creationism proposes constant cycles of simulated worlds; and we are waiting for the right time. It is a plausible proposition to wait until the whole simulated creation is ready for this step, while some species are more advanced, and some less.

It all comes down to this: if God exists and extraterrestrials exist, God was responsible for them so their existence does not undermine God, His Creation, or His Simulation in any way. As God Himself states: “It is I who made the earth and created mankind on it. My own hands stretched out the heavens; I marshaled their starry hosts” (Isaiah 45:12). If there is intelligent life out there, it would not change the relationship between God and humankind. We are still special, as much as the first child is special to his parents; but not saying that the second child is not special too. In this sense, Simulation Creationism supports the idea that the existence of an alien species is possible, it does not contravene God’s plan, and it makes a simulated creation even more plausible.